Earth’s Lungs. The Amazon is Burning. 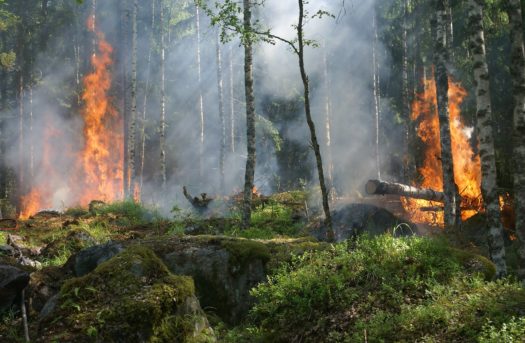 We are poisoning the Earth. We, the most intelligent beings to inhabit an improbable paradise capable of sustaining life. The Earth, a living organism that we do not deserve. The Amazon Rainforest is being burned. It is not burning by mere coincidence, make no mistake. This is not a natural phenomenon, nor is it a new event — record keeping of forest fires in the Amazon began in 1993. But this is a practice dating back thousands of years.

We are burning the largest rainforest left on the face of the planet, and with it, 6% of breathable air. One in 10 species. ¼ of known medicinal plants. Billions of trees. And we are destroying one of the Earth’s last natural protections against man-made carbon emissions. The rainforest captures Carbon Dioxide, thereby reducing emissions — without it, climate change will accelerate. And with it, the self-inflicted hardship mankind will face: drought and famine and mass extinctions. Rainfall patterns will shift, as the Amazon is responsible for roughly 40% of rain. Life as we know it will cease to exist in the capacity it does today.

Fires in the Amazon Rainforest are largely set in order to clear land for cattle farming. The Brazilian beef industry is facing increasing global demand. As a result, Brazilian farmers need more land for cattle to graze. The slash-and-burn agricultural technique is common in this region, and as demand increases, the product of our own consumerism, so does the need to clear land. Fires throughout the rainforest ensue.

To an extent, we can blame politicians rolling back effective environmental protection policies. In particular, Brazil’s current president Jair Bolsonaro. Prior to his election, deforestation was decreasing throughout the region. At a record high in 2010, it decreased significantly over the past eight years, only rising recently as Bolsonaro shifted policies from emphasizing environmental conservation to placing profit and nationalistic ideals above all else. Nationalist sentiments reigning as an excuse for negligence is not a solution. It is revenge. Revenge has no place in a world with a nearing expiration date. Likewise, large corporations are responsible for this continuous tragedy — money is the root of corruption. But we fuel these industries. They make money because of our greed. We place value in an otherwise invaluable thing. We cannot act as separate parts fueled by tainted intentions. This is our global fate — each country, each business, and each individual. We must treat it as such.

We are addicts seeking comfort in convenience, nothing more. Addicted to monetary wealth. Living as though forgoing beef is an unfathomable feat, and turning to a plant-based diet is simply impossible. Living as though using a reusable water bottle is a great hindrance. Living as though plastic will disappear once it is thrown away. Living as though each piece of paper we use is not the product of great sacrifice. Living as though the clothes we wear are not contributing to anything more than aesthetics. Living as though an individual’s actions do not matter in the grand scheme of salvation — no one is coming to save us. And if we wish to ensure the fate of the generations to come, we must take action. We cannot wait for someone else. There is no one else. And when the clock runs out, and redemption passes by, we cannot find comfort only in sharing an outdated picture on social media spreading misinformation, nor merely voting for a government official perceived to care about the environment– we have to live as we vote, and practice what we claim to believe in. We can only find comfort in our own actions.

We must take action. Real action. Recognize that the planet is not a part of us, but rather we are a part of the planet. And as parities, we must live deliberately. Respect what we take, and do not take too much, nor leave too much behind. Please.