A Project for Better Journalism chapter
The Messenger Online
NEWS 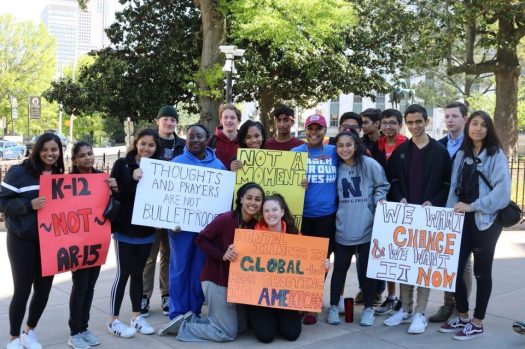 *Marcus, Hazel, and Aaron are aliases for three Northview students who have chosen to remain anonymous. The Messenger staff has chosen these names for them in order to protect their identities. Any similarities to real students names are purely coincidental.

Two months have passed since the Parkland shooting, a tragedy that shocked America and moved the youth of our nation to take up arms against the problems of our bureaucracy. On March 14, Parkland’s one month anniversary, Northview students participated in the National School Walkout to protest gun violence and to honor the lives of those lost.

Another month later, and these students have proven to the nation that this is not an issue that will be easily forgotten. On April 20, dozens of Northview students skipped school to meet with other high school students in Atlanta to march in front of the State Capitol.

In front of the Capitol, students were able to keep their protest peaceful by talking to state representatives and the media.

He along with a dozen other Northview students rallied in front of the Capitol building, some of them having the opportunity to be interviewed by local news. They carried picket signs and posters, shouting chants as speeches were given by student leaders.

“The speeches, the poetry,  and the sheer energy in the crowd of students is enough to motivate all of us to keep going and continue to demand what we deserve,” sophomore Anushka Koratana said, “our safety and protection at schools.”

At the same time, many students who participated in the one month anniversary march were attending school- unable to travel to the State Capitol because of unsupportive parents or lack of travel means.

“To the people who didn’t go because they felt that they would be punished, your concern is well founded, but no change has ever come by passive participation,” said Aaron.

Others simply found it not worth the school time they would be missing.

“[It was] the fact that I had to go somewhere took time out of my busy schedule, whereas in school it’s easier to participate,” sophomore Sean O’Neal said, explaining why he was one of many that participated in the first protest, but not the second.

There were also those who were unaware of the April 20th march, like freshman Nick Huang.

Many chose to take the tragedy as an opportunity to start dialogue between both sides, and to make sure that all viewpoints were recognized. While majority of Northview’s student population openly support gun control, there are still those against it.

“I support gun rights because I don’t want to lose the principle of what America was built on-freedom,” Marcus* said.

Multiple group chats have opened up since Parkland, encouraging civil debates. During gun control debates, a topic often brought up is the funding for potential gun control laws.

“I don’t think there’s enough money in the budget,” Hazel* said, “to enforce new laws in every single school.”

Through the March For Our Lives Movement, the youth has found its voice by taking on roles of leadership and getting involved in politics.

“This issue shouldn’t die after a single news cycle and by participating, we helped keep this issue in the front of everyone’s minds,” Aaron said.